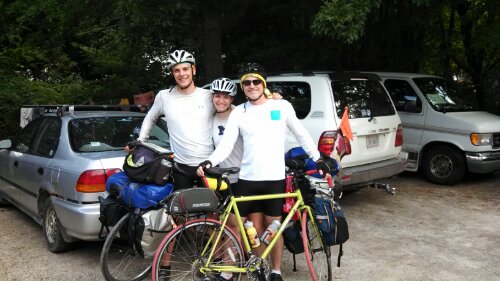 Christine’s Dad joined us in Middlebury for the last big mountain ranges of the trip: the Green Mountains and the White Mountains. We climbed up Middlebury Gap and entered the Connecticut River Valley.

By the time we were ready to camp for the night, we discovered that everything within a 20 mile radius (other than a place trying to overcharge us for a site without bathrooms or water) was totally booked up–except a place called Camp Joseph. So, we headed that way with Wallace’s friend Mike and his glorious dog Daisy. When we got there, we suddenly realized that this camp was named after the Mormon prophet Joseph Smith. This was his birthplace. Here’s the tallest polished granite shaft erected in his memory:

Evidently Joseph Smith wasn’t a huge fan of dogs, because a sign at the campground forbidding pets of any kind greeted us. Christine went to see what could be done, and was then informed that non-Mormons (like dogs) were not allowed at this camp. The owners, though, took pity on us–especially after they learned that Christine and Wallace are direct decedents of Brigham Young–and allowed us to camp across the street at the archery field. Quite an adventure for us wandering campers. 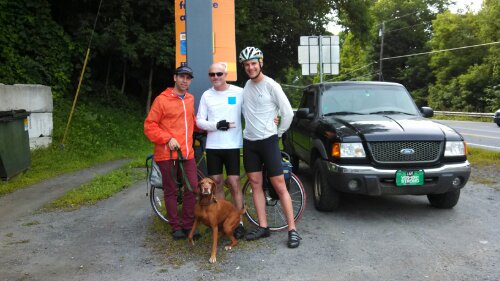 We bid Mike and Daisy goodbye and then continued on our way. The mountains are never-ending. Constant rolling hills took us across the border into New Hampshire, where we prepared for the next day’s big mountain climb. 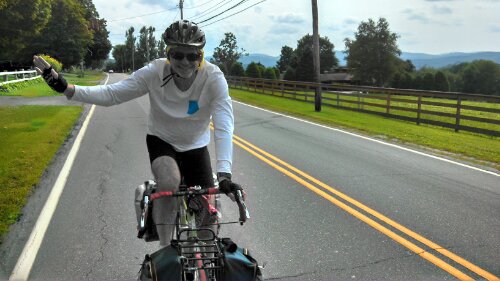 August 19: 56 miles from Lost River Valley, NH to Freyburg, ME

This day was all about the Kancamagus Pass!  It was a long but beautiful climb to the top:

On our way down we stopped for a few hours for lunch and swimming at Lower Falls–one of Christine and Wallace’s old time favorite spots. So fun!!

Then we crossed into Maine!! Yahoooo!

Our camping situation was complicated again–this time because the place we were planning to stay at was shut down!  So, we dragged our loaded bikes through sand to the shores of Saco River where we sneakily camped by the light of an enormous almost-full moon.

Note: cooking in the sand is really hard.
August 20: 72 miles from Freyburg, ME to Brunswick, ME

Today was a bit of a slog. Wallace came down with a nasty cough that made it hard to breathe, let alone power up the steep, unrelenting hills of Maine. But we had a great motivator: the Atlantic Ocean!  We spent the night with wonderful Warm Showers hosts who fed us a delicious meal and then put us to bed in their comfy, cool basement.  Thank you P, L and E!!

August 21: 28 miles from Brunswick, ME to Portland, ME

This day was pure fun-except for Wallace who got sicker. But still, it was a beautiful ocean-filled day! We were escorted by our Warm Showers host to our first official Atlantic viewing on our bikes. Very exciting!

We wove on and off of ocean-side roads until we hopped on the ferry to Chebeague Island, where we met our friends Erika, Natty and Lari!! 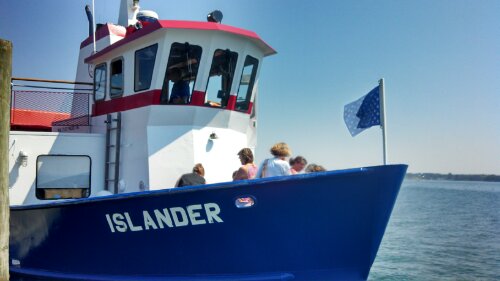 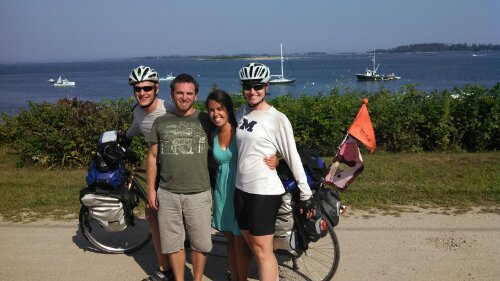 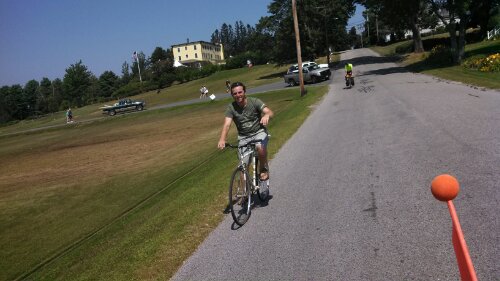 Ian and Christine jumped into the Atlantic (woooohooo!!) while Wallace took a ceremonial nap. Then we ate a BBQ feast!!! Thank you Erika, Natty and Lari for such a wonderful lunch hang out!

We ended our day in Portland at Ian’s sister Kate’s house. We took her dog Ruger for a walk and had a wonderful night catching up with Kate in her new digs. Finally, our friend and fellow cyclist, Alex came to join in for the last few days!  Welcome aboard.

Wallace decided after conquering the mountains of New England sick, he better go home and get well, so he took the train back while Alex joined us for a day of biking through adorable seaside touristy Maine towns.  We followed windy, shady roads with views of the water and lined with enormous summer homes.

We’re waking up now ready to bike Alex’s longest day yet. Today we cross into Massachusetts!  Hard to believe we are so close to home.